What is Nojiriko hominin? Were there humans in Japan 40,000 years ago? Approaching the mystery that affects Japanese history …!

Q. Did people definitely exist here at that time?

A. That is the biggest matter. Some think it is true, while others think they hadn’t come from the continent yet. If there were no humans yet, what were these stone tools found here? What are these if not stone tools? However, some people say that a certain part may not be stone tools, actually there is no consensus yet. Some people think that even the bone tools are not. Although, researchers in overseas almost recognize it as bone tools. Because similar things have been found a lot in overseas. 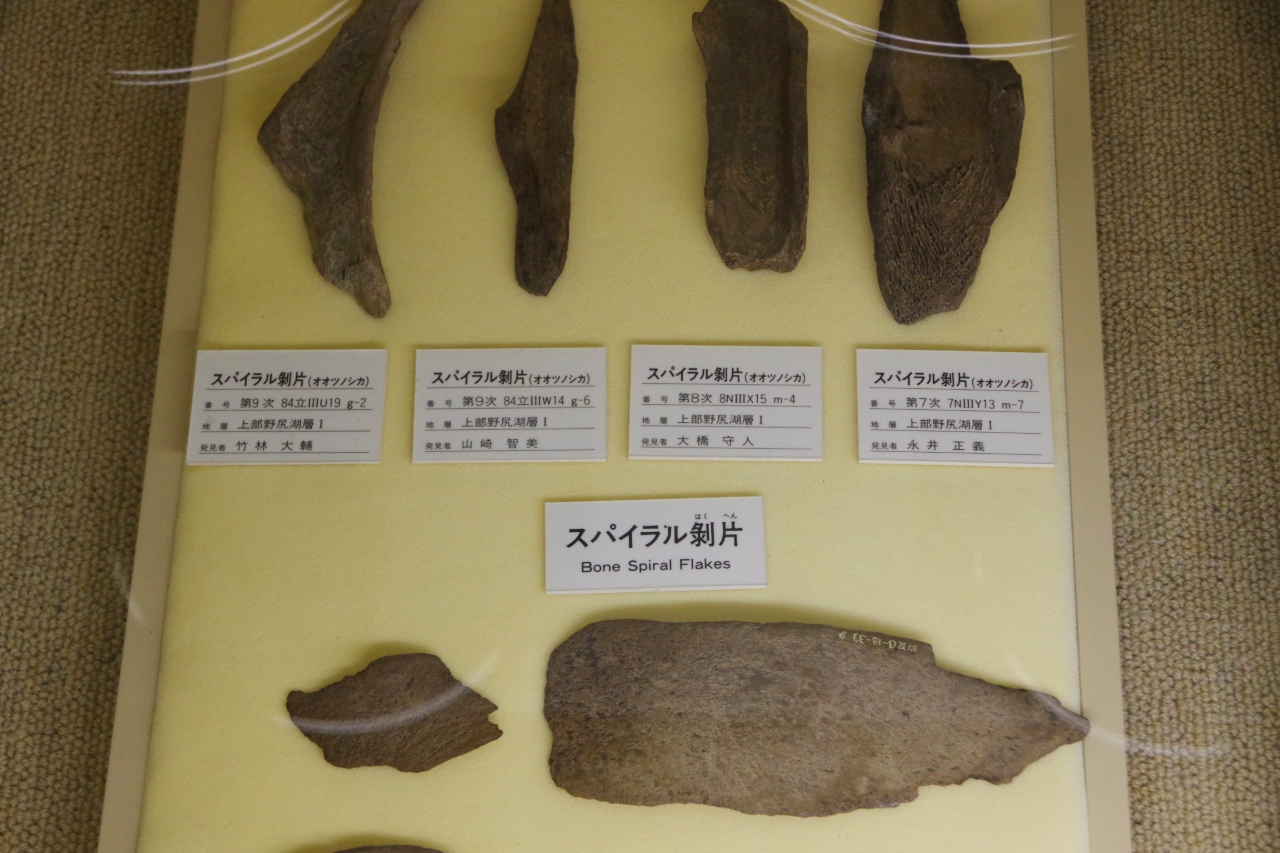 Q. Is there a place other than Lake Nojiri in Japan that was considered as a hunting place of Naumann elephants?

A. No, only here.
The place  called Hanaizumi located in Iwate Prefecture  has a possibility, but there don’t have as many things have come out as Lake Nojiri.

Q. Did you find anything interesting in recent excavations?

A. About three bones of a big horn deer came out the other day, and the other two pieces that were found 34 years ago and 10 years ago fit exactly to those three. Those bones found about 10 meters away, but fitted exactly. We found out that the bone was broken in pieces by being applied some force at one point, but why were those 10 meters away?

We can think that it might have been broken with a stone tool. Moreover, they came out of the same stratum where was considered that hunting were done.

I guess this is saying something.There is no decisive evidence yet, though.

Now, many people are trying to find traces of broken fossils that were surely broken by stone tools. Many have been found in overseas. There are also many papers in foreign countries that indicate the sign of hunting by human race at that time.

We are doing such research here, but it is still unclear whether those wound were made with stone tools or not. For example, it is easiest to see if a stone tool is stuck in a bone or something like that. It’s far more likely than finding a human bone.

The other possibility is finding footprints. Elephant footprints have been found here, so it’s no wonder that human footprints come out near it.

In the next excavation, we are going to sift and take all the fine bones. We are trying to find human teeth in soil.

Q. Can you find any hair from the past?

A. Finding hair is difficult. However, with current environmental DNA methods, DNA may still be exist, even if nothing is left in the soil. If such technologies are developed in the future, human traces can be found from organic matter in the soil. As technology continues to evolve steadily, it would be interesting if young people take bold challenges and approach human traces. 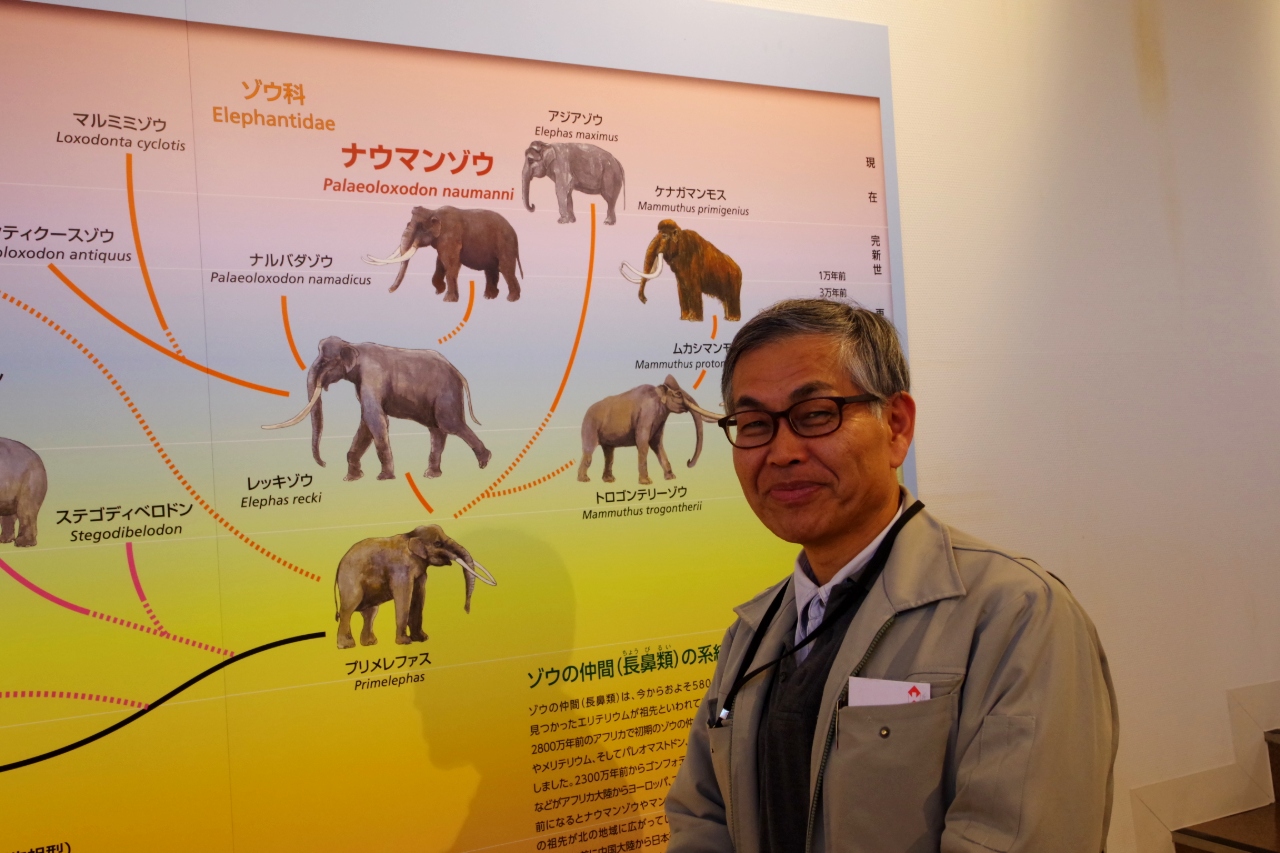 Q. Thank you for talking about the excavation in Lake Nojiri. By the way, what is the difference between Mammoth and Naumann Elephant?

A. Times, places, and environments that they lived are different. Mammoths lived north than Hokkaido and Naumann Elephants lived south.
Naumann elephants were extinct around 30,000 years ago, but mammoths lived until 3,000 years ago. And the size and shape of the tusks are completely different. In short, the mammoth is designed for cold climate. 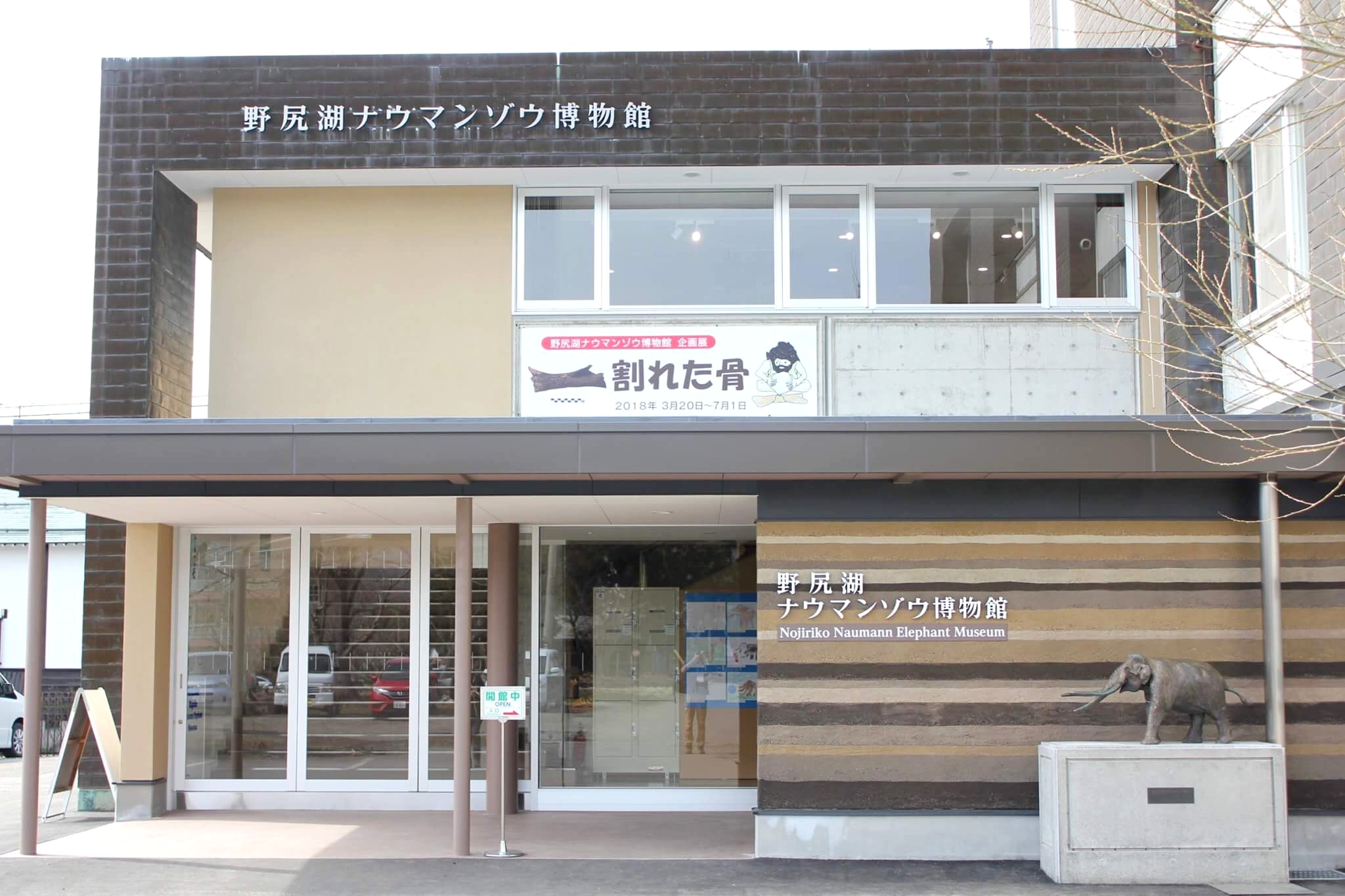 In 1984, the Shinano Municipal Nojiri Lake Museum was opened to store and display fossils and relics excavated at Lake Nojiri, and to play a role in comprehensive research on Lake Nojiri. In 1996, it was renamed to Nojiriko Naumann Elephant Museum .
At the Naumann Elephant Museum, approximately 80,000 excavated items are stored, which have been found since the first excavation, of which about 1000 important fossils and relics are on display. 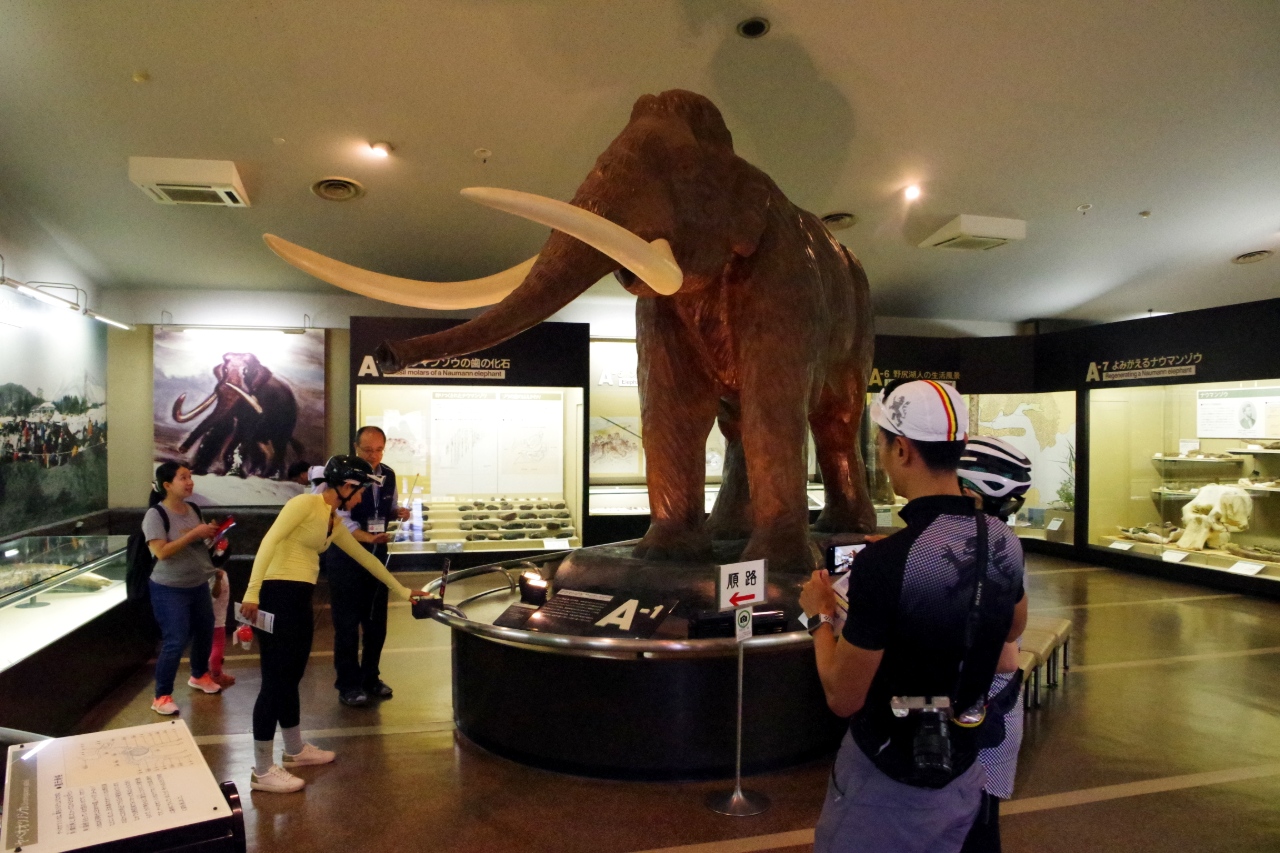 The permanent exhibition room displays a full-sized restored statue of Naumann elephant, excavated tusks, bones, teeth, and other fossils, as well as Paleolithic stone and bone tools that prove that people lived there. 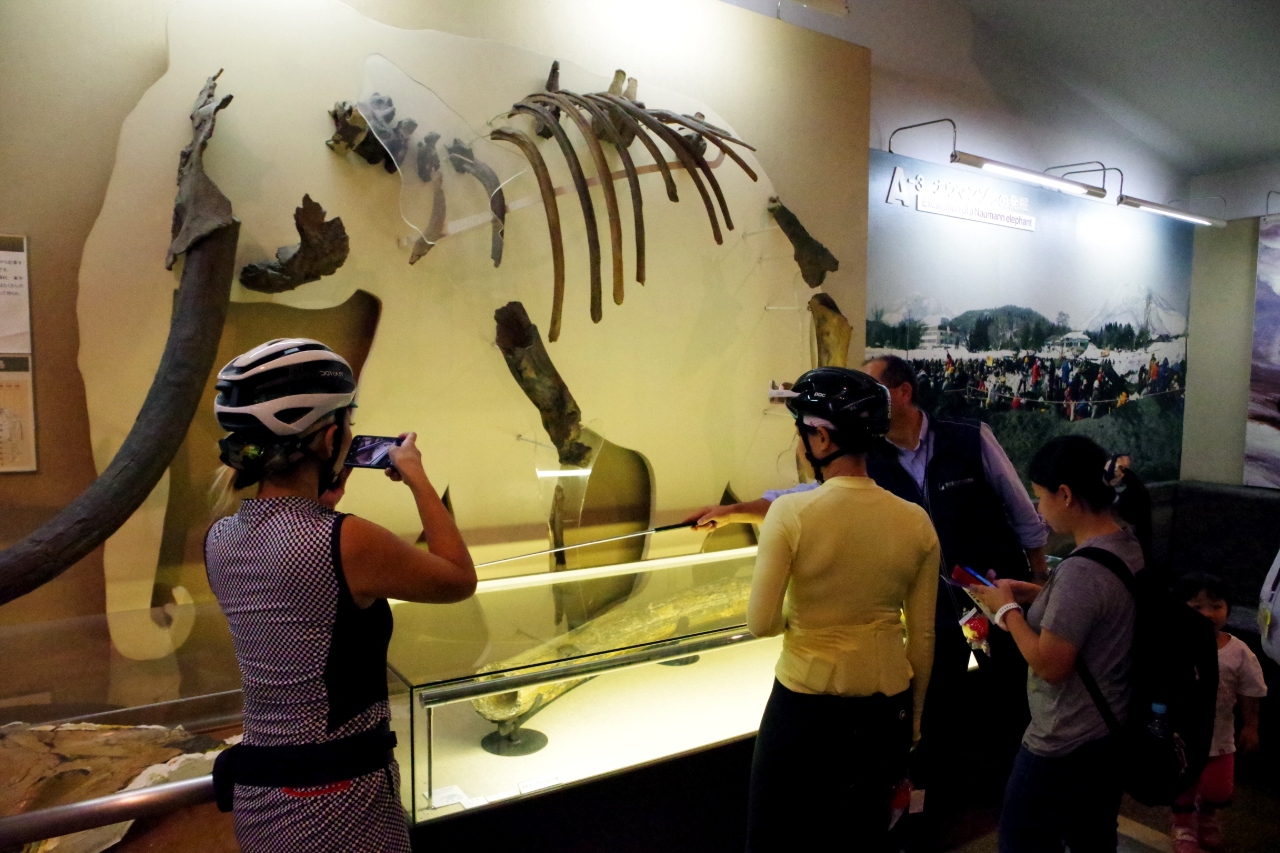 In addition, the museum was renewed in 2018, and a new ice age experience corner, souvenir corner, and rest space were set up on the first floor. 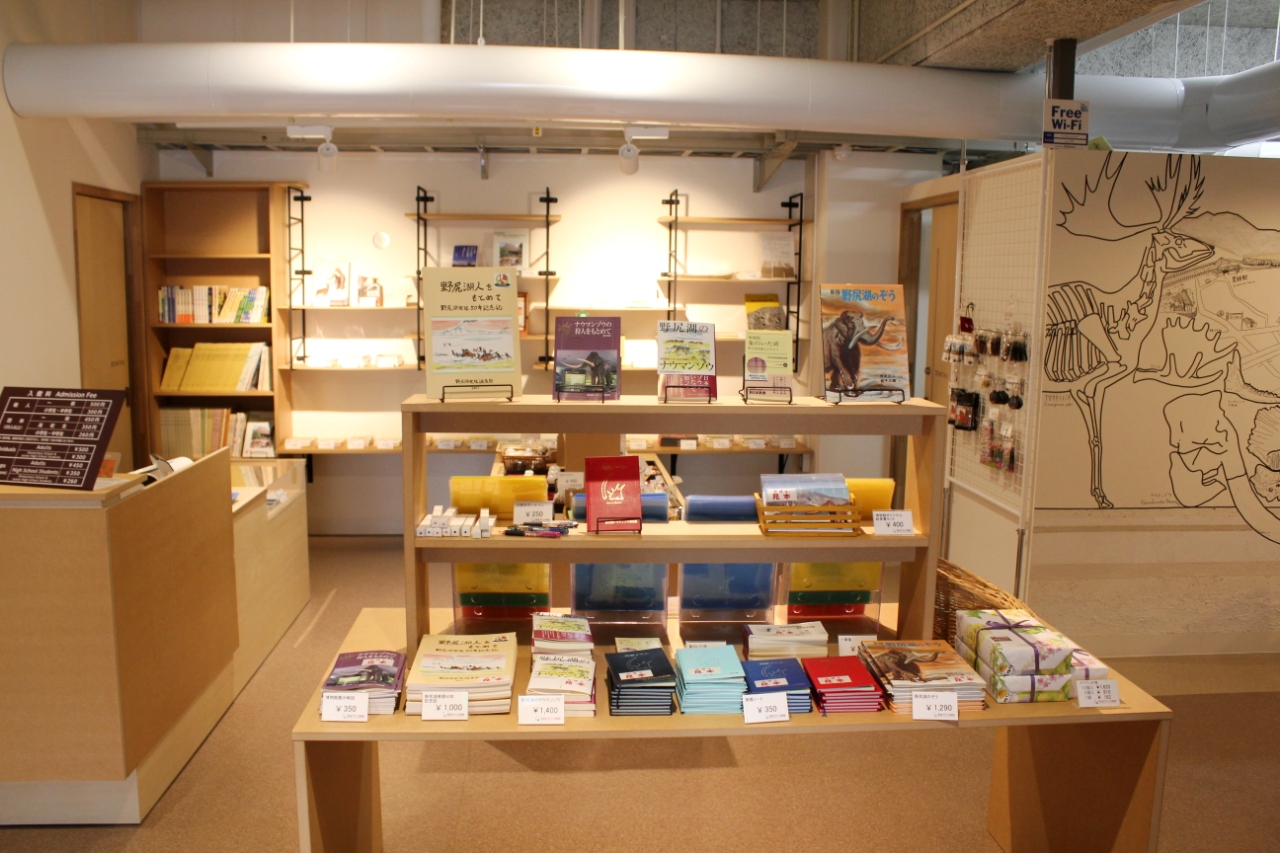 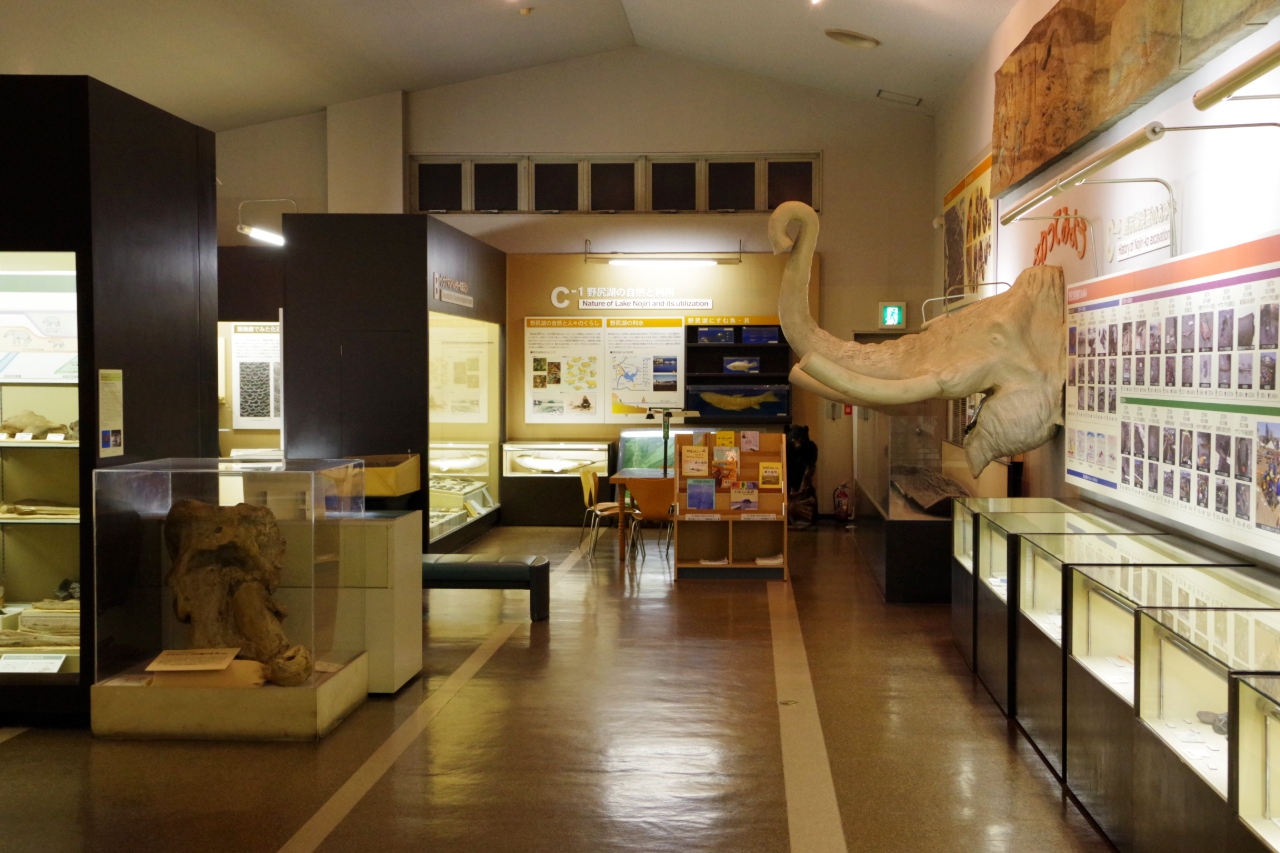 Q. What are the highlights of the Naumann Elephant Museum?

A. There are two highlights.
The first is to understand that what the Naumann elephant was like, which existed only in Japan 40,000 years ago during the Ice Age, and in what environment they lived by using the data found here. The latest data from the excavations are constantly being updated and fed back to the museum. And, in fact, we can say that this is a museum where you can participate in the excavation. That is a big point.

The second is that it is a museum created by participants of excavations. More than 20,000 people have participated in the excavation and they created this museum.
These two features are the unique points.

From Lake Nojiri to the world?  What is the potential of Lake Nojiri!?

A. New techniques that I have talked about. Of course, it’s absolutely important to use the basics , and to know exactly which stratum the fossils are found. The age-specific measurement is still only hundreds of years. I want to do it with one year accuracy. I think it will probably be possible soon in the future. 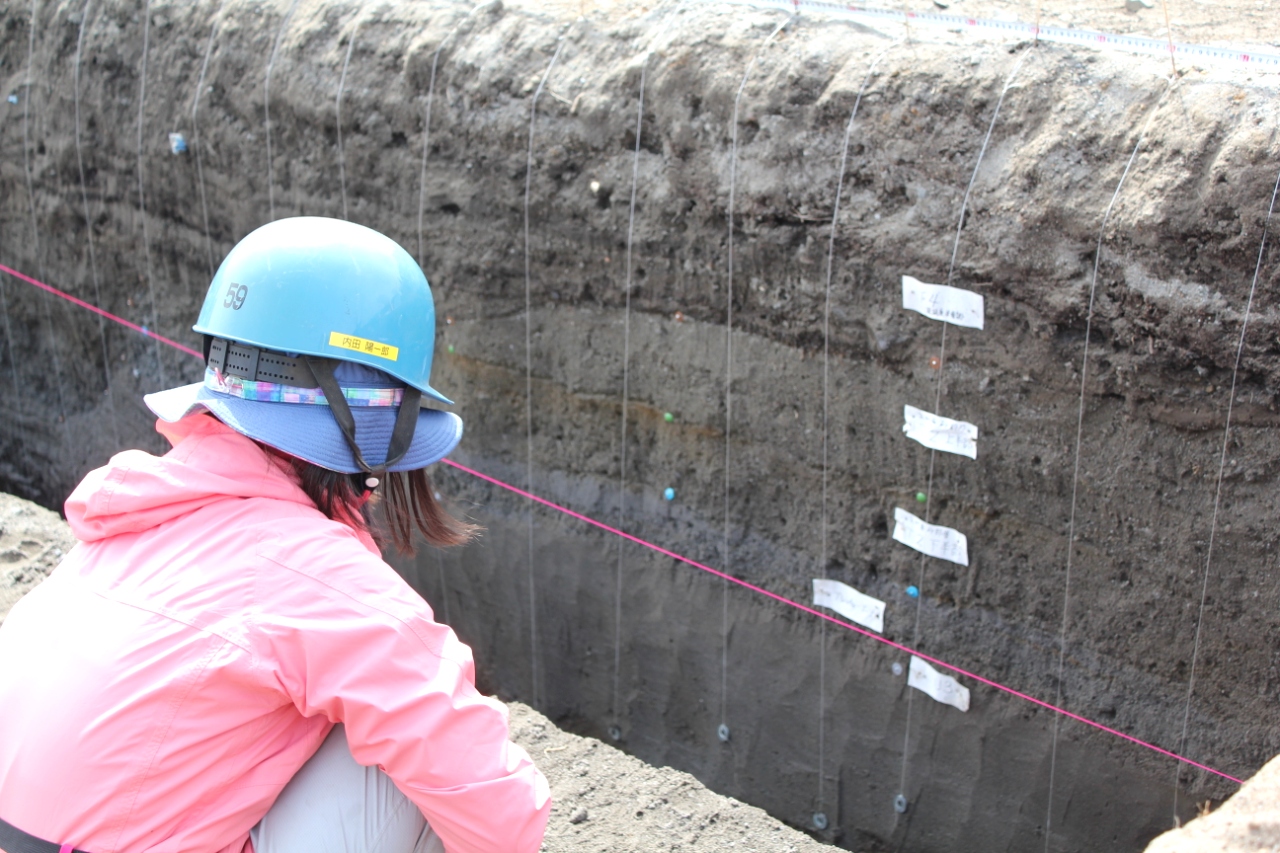 And one more thing than finding traces of humans.

Now, the global environment has entered a period of change. There were times of such climate change in the past as well. The data remains in the stratum of Lake Nojiri. We can study the changes of the global environment by looking at the geological formations of Lake Nojiri.
We have not been able to recognize such things enough yet, but when we look at pollen fossils, we can see that there have been cold and warm climates in the past. There were times when volcanic eruptions, earthquakes, heavy rains and typhoons were quite frequent, and times of quiet climate.
It’s exactly similar to the current situation. So why has it been changing?

Talking about the global warming, of course human influence is huge, but the global environment is changing regardless of that. Isn’t there a factor other than human beings for such a change? As we study that, we may come to the data from Lake Nojiri that will benefit our future.

For example, let’s think about the problem of less snow.
When did the heavy snow falling start? What will happen to Shinano town if snow stops falling? Those situations were happened in the past, here.
There were no ski slopes in the past, but you can see what the environment would be like without snow. I didn’t expect it to come so quickly though.

By collecting the accurate data, Lake Nojiri may be able to provide information on how to handle the disasters and changes in the global environment in the future.

Q. How many years will that take to make it possible?

A. Probably about 10 years. The speed of technological innovation is enormous, so I think that maybe in 10 years, a completely different approach will be possible. From sediments and inorganic substances, I think it will be possible to elucidate changes of the climate.

Through the experience, we tell children the fun of science and logical thinking.

Q. How many years will you continue the job as the director?

A. Well, I’ll keep doing it while it’s fun. However, if human bones come out, a new museum era will begin (and I will not be able to stop)
The most interesting point in science is the process in which there are targets and various people think and pursue them to solve them. The logic in the process is important, and here you can do it with kids. Through the experience with the young kids, we tell them the fun of science and logical thinking. The act of digging by using their hands nurtures them a sensation. It’s absolutely not possible with virtual or artificial intelligence.

Especially since a small child, it is important to get acquainted with nature, feel and learn that kind of thinking not only with a head but also with a body. Sensitivity is grown up by such an experience. 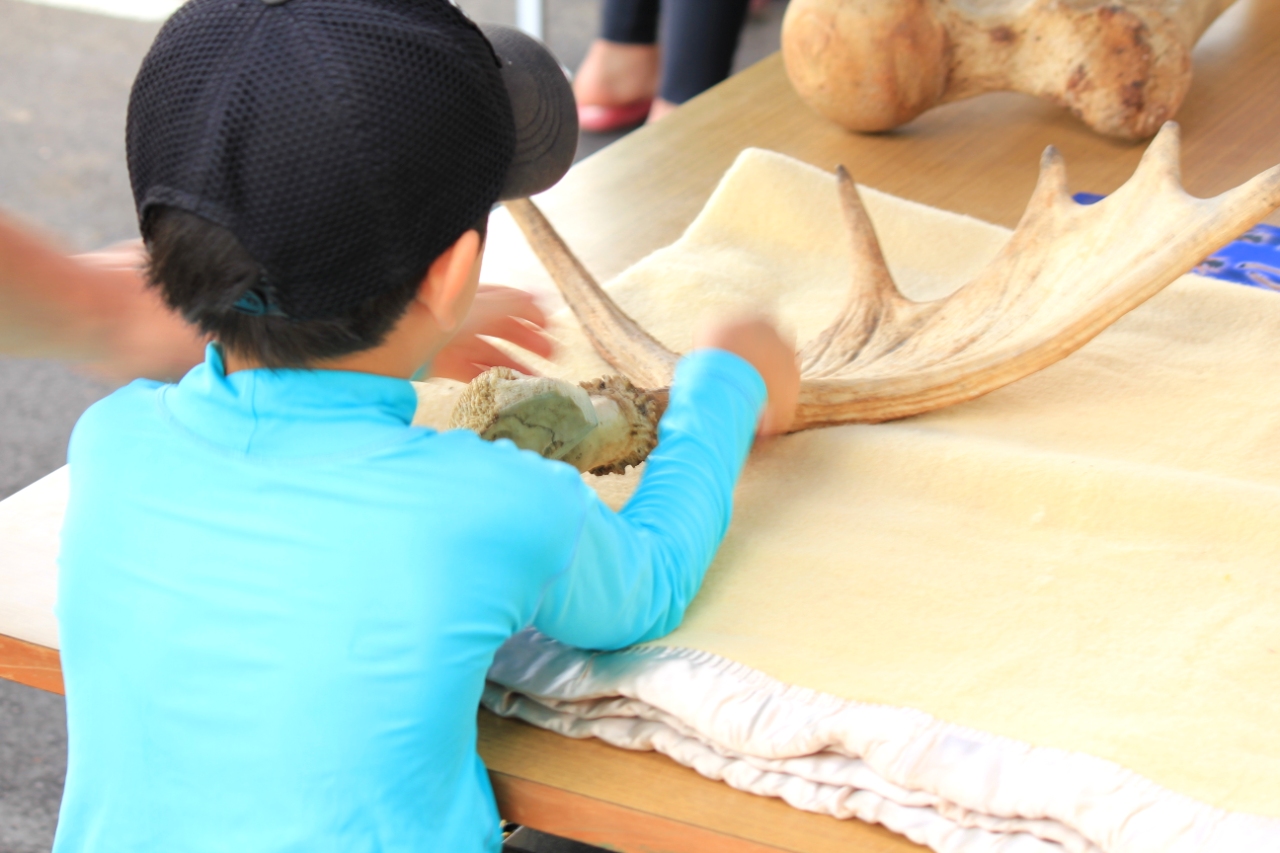 I think that is a very important issue when thinking about human evolution, so I think that doing excavations with children can be a positive in many ways. In order to create new things, it is extremely important for humans to enrich their imagination and hone their sensibilities.

Children grow up with smart phones, without touching and knowing nature. They will become an adult before they develop their sensitivity as a human, so it will surely be dangerous.

I want to give a warning to that.

I think it is better that small children grow up in the such environment surrounded by nature while feeling the scenery of the abundant nature. I hope Shinano town can show its importance more. An exciting experience such as excavation experience, will definitely be a plus in any form.

Don’t have to find anything.
If kids have the excavation experience here, it will definitely be useful someday.

The Healthy, Healing Forests of Shinano-machi