If you take a look at an aerial photograph of the area on the northeast side of Mt. Iizuna, with Mt. Kurohime just to the north, you’ll see something interesting in the forest. It’s not hard to do today, with all the online mapping service available with just a swipe of a finger or a click.

Much of the forest area at the foot of the mountain appears as big blocks of trees, all made up of one color, with all the trees the same shape. Now go a little further northeast, and there’s a sudden break. It looks like a wall: on one side is big, dark green trees (actually forests of sugi—cryptomeria, sometimes called Japanese cedar). On the other is more randomness—all kinds of trees, big and tall, clearly not all of one species. There is a mix of colors and shapes and sizes. You’re now in the Afan Forest.

The big stands of cryptomeria are what is called mono-species planting. This is common around the world, as it simplifies forestry activities. It’s not always great, however, for the other plants, or for animals who dwell in woodland.

The Afan Forest, too, while a more natural, balanced woodland with many more species of trees and plants, is not the result of a hands-off approach to forestry. In fact, it calls back to the Japanese concept of satoyama, a traditional, and some would say more harmonious, relationship between people and the magnificent mountain terrain. Villages gather below the hills; higher up were open fields where grasses were grown, both for animal feed and as the source material for thatch roofing (in fact, many of the ski areas around Shinano-machi are graced in autumn with the waving, feathery heads of tall grasses). Above this oak trees were grown for charcoal production, while people used fallen leaves from the forest as fertilizer, cut larger trees for firewood, and collected new plant shoots in spring—sansai—and mushrooms in the fall. That is the tradition that has taken root in the Afan Forest. 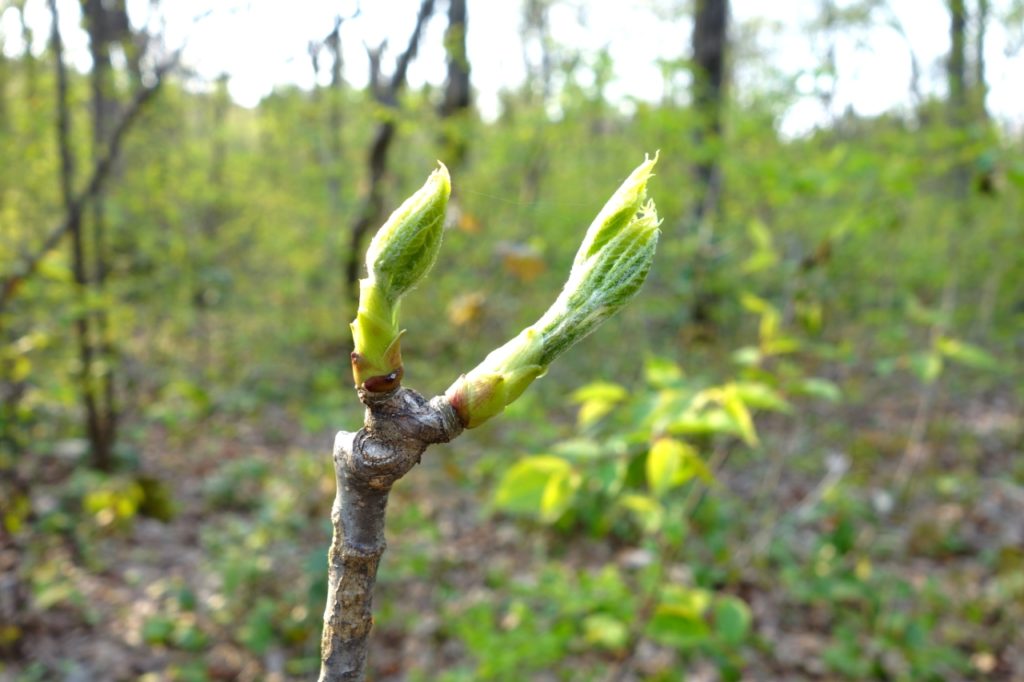 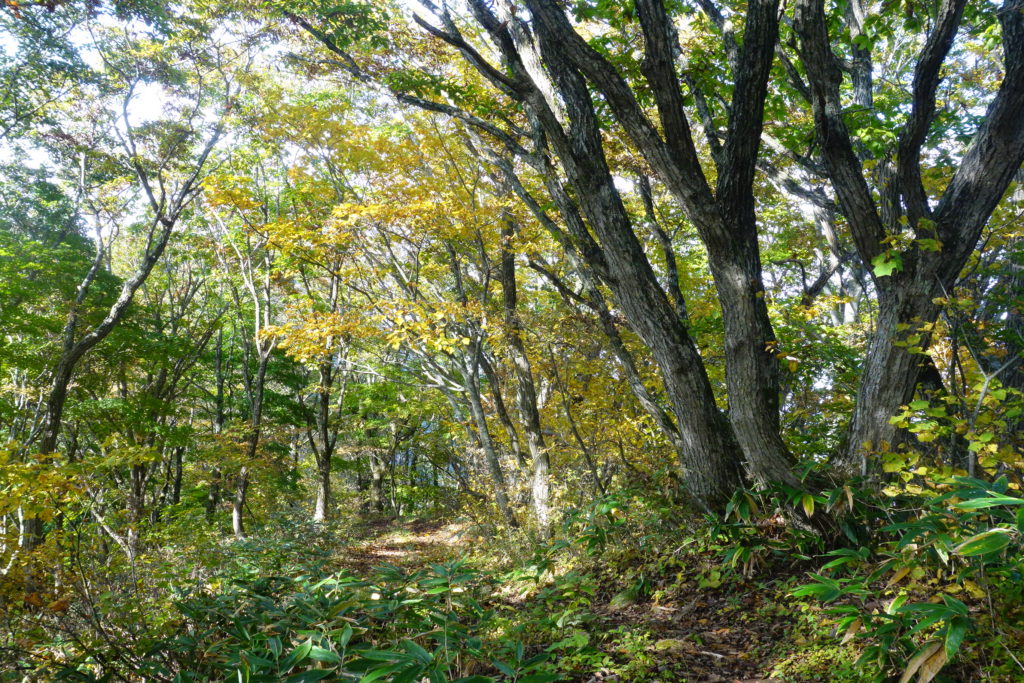 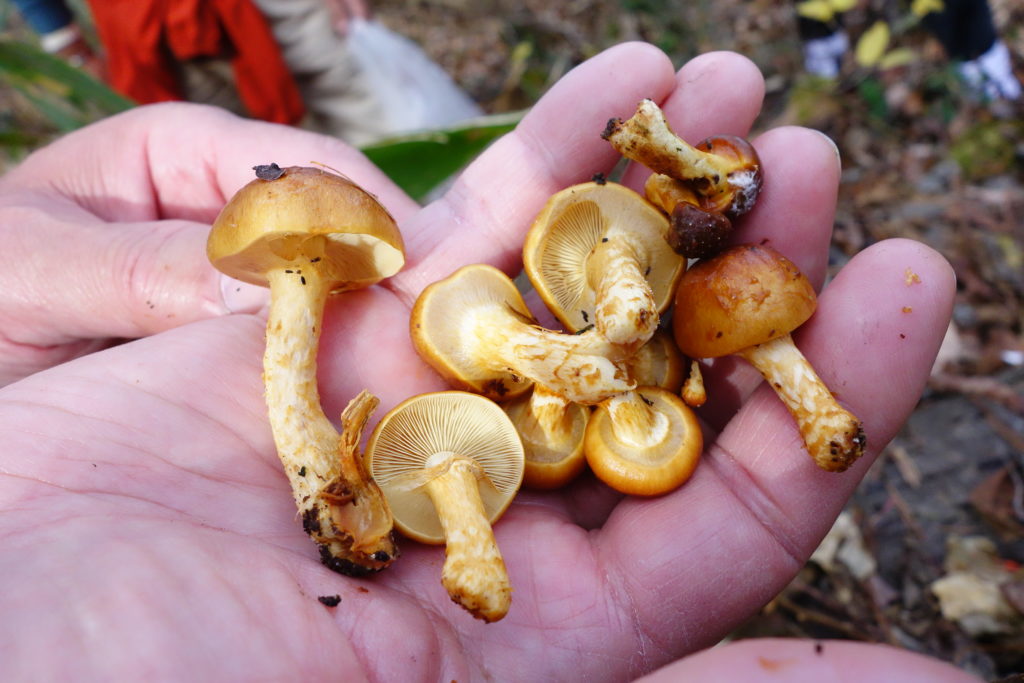 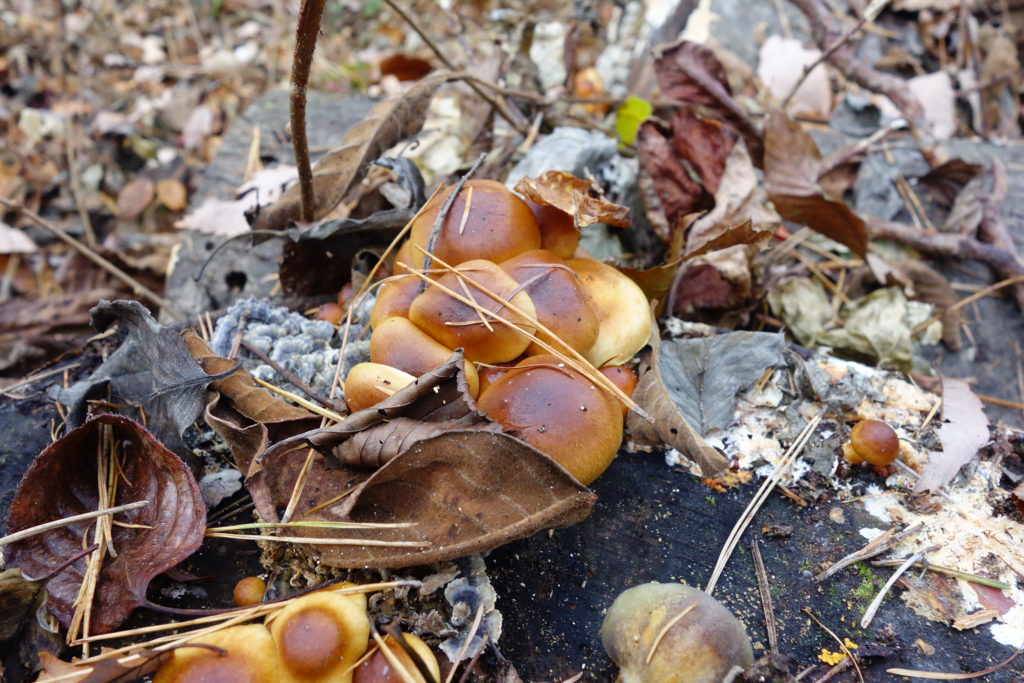 I first heard much of this nearly 20 years ago, during a wonderful wine-filled lunch with CW Nicol. To understand the Forest, you have to know something about Mr. Nicol. In the 1980s and 90s, it wouldn’t be necessary to explain who he was, as he was often on television in Japan, talking about nature, yes, but also appearing in ham and whiskey commercials. A writer, musician, martial artist and, most importantly, naturalist, Clive William Nicol (almost always known as CW or Nic) was arguably the most famous foreigner in Japan (although in fact he became a Japanese citizen in 1995. He certainly was Shinano-machi’s best-known citizen in modern days. He was definitely a man of strong opinions, a man who sometimes butted heads with the locals, but also a person who really helped to move things ahead for this area. During our meal, he spoke passionately about the problems of mono-species planting, and of the need to restore the traditional forests.

“Nicol-san set up the Afan forest (afan being both a river and a forest in Nicol’s native Wales) way back in 1986, in order to save the forest,” explains Wataru Ohsawa, Manager of the Afan Forest Office, a striking building made entirely of sustainable forest products and set on the edge of the forest. “He saw the beauty of the Japanese forests, and felt that there was a special quality that he thought had to be protected.” So he began to buy up forests in a time when much of the area was being cleared out and replanted, often with just one species of tree—good for lumbering, not great for the forest ecology. The continued purchases—funded in large part by those appearances in commercials and other activities—eventually stretching to some 34 hectares of forest.

“He started forestry activities to clear out the brush and thin the tress,” Mr. Ohsawa explains. “He wanted to increase the biodiversity of the forest, which would also protect wildlife. By restoring the forest, more light could come in, which meant more plants, more flowers, more insects and therefore more birds and animals. In restoring the forest, they would also see how animals would respond, and adjust accordingly.

“He also wanted to create a system where others could carry on in the future,” he says. “So in 2002, the C. W. Nicol Afan Woodland Trust was formally established.”

The forestry work continues today, even after Mr. Nicol’s passing in 2020. Mr. Ohsawa points to the Afan Horse Project, begun in 2016. Two small but hardy horses from Hokkaido not only provide a unique activity for visitors, but are also actually working in the forest, helping to drag out cleared trees and brush. “They’re really part of the forest restoration project—this is not just a horse-riding experience!” he says. The stable, like the Forest Office, is a beautiful building that fits into a landscape of forests and farms, and has stalls for six horses—clearly this is a project looking to the future. 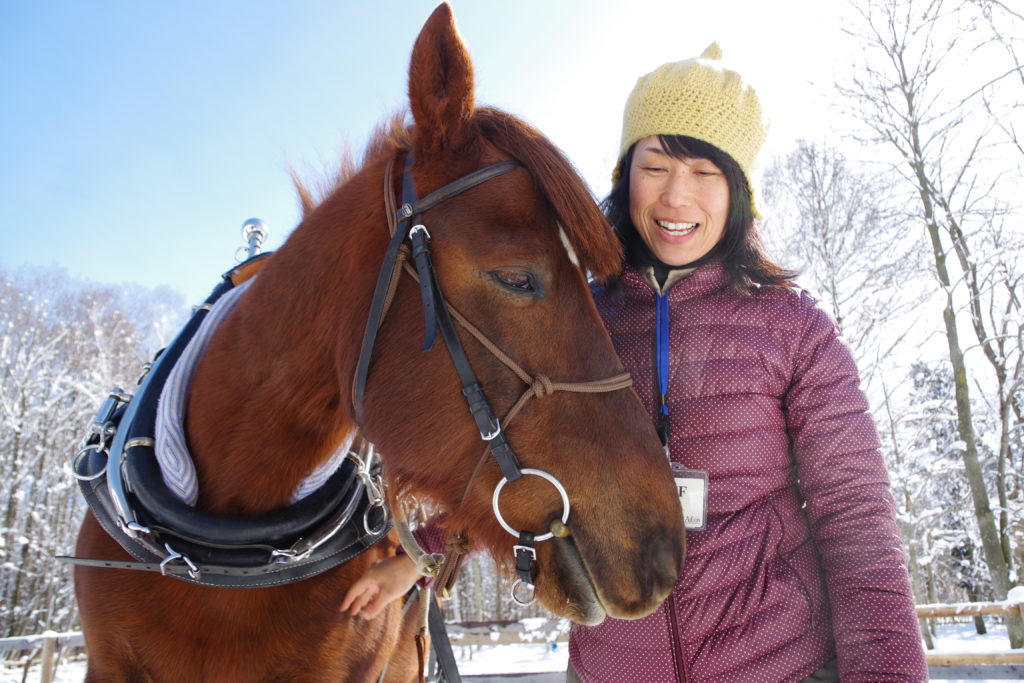 The Afan Forest, though, is not the setting for large tours or others trekking through it. “It’s the same for all the activities here; the whole key is in balance,” Mr. Ohsawa explains.

But the presence of the forests, and the awareness of the importance of forests not just for the diversity of life but for all of us humans as well, has led to Shinano-machi becoming something of a world leader in what is now known as shinrin-yoku, or Forest Therapy.

The concept is simple: one of the local guides, or “trainers,” brings small groups on a relatively long walk over a short distance through the forests. The goal: to help modern people, particularly stressed-out urbanites from Japan’s big cities, to slow down, to smell the many fragrances of the forest, to really hear the sounds of wind and birds and water, and to throw off many of the lingering stresses of normal life. 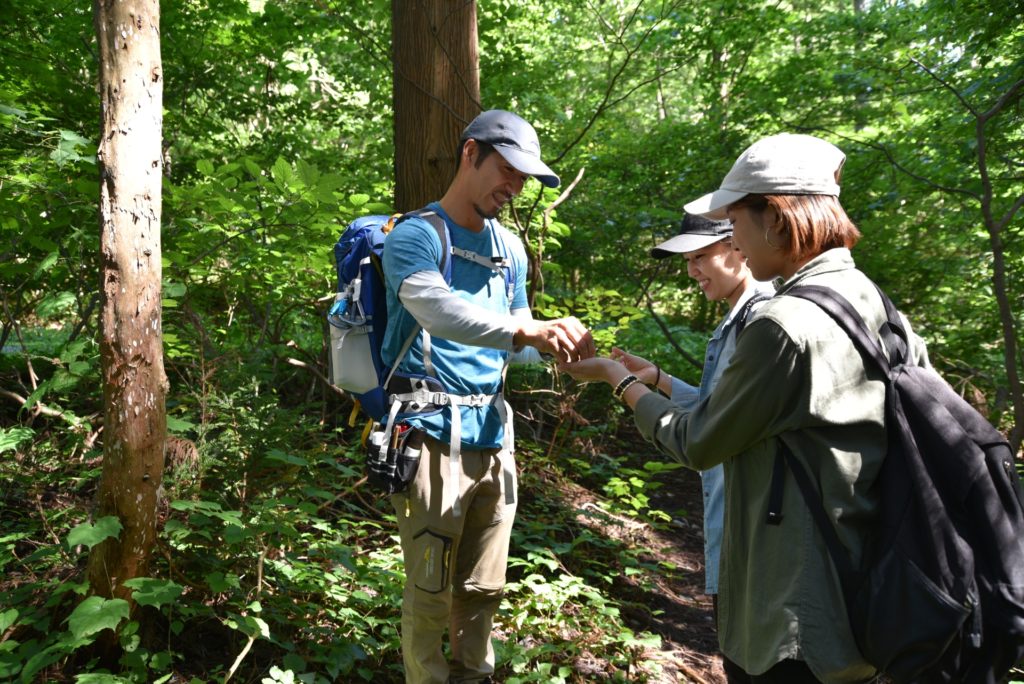 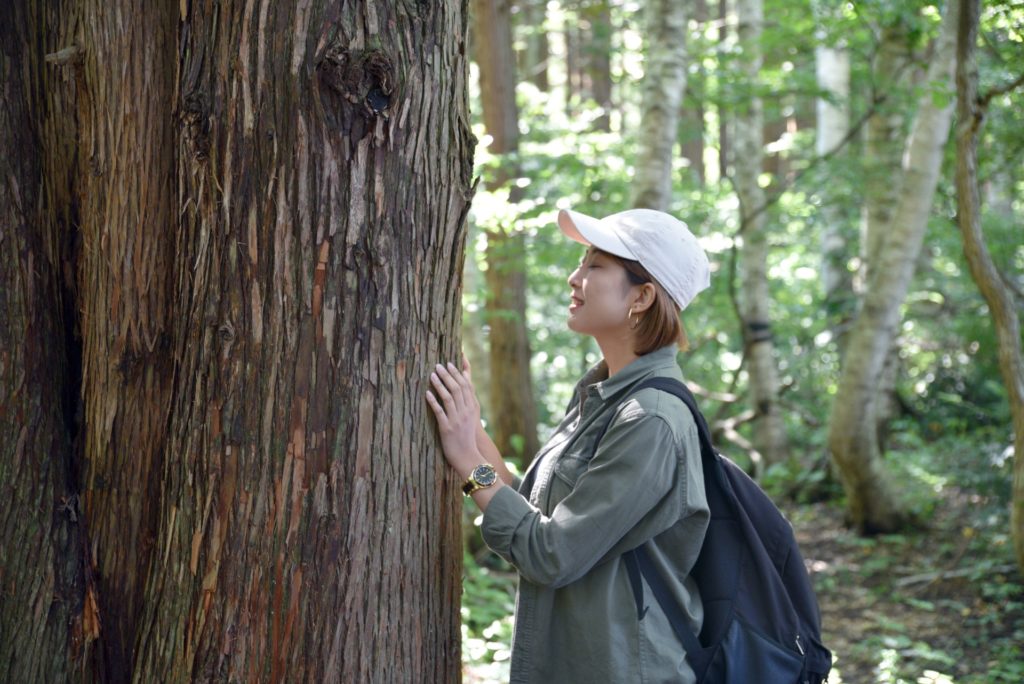 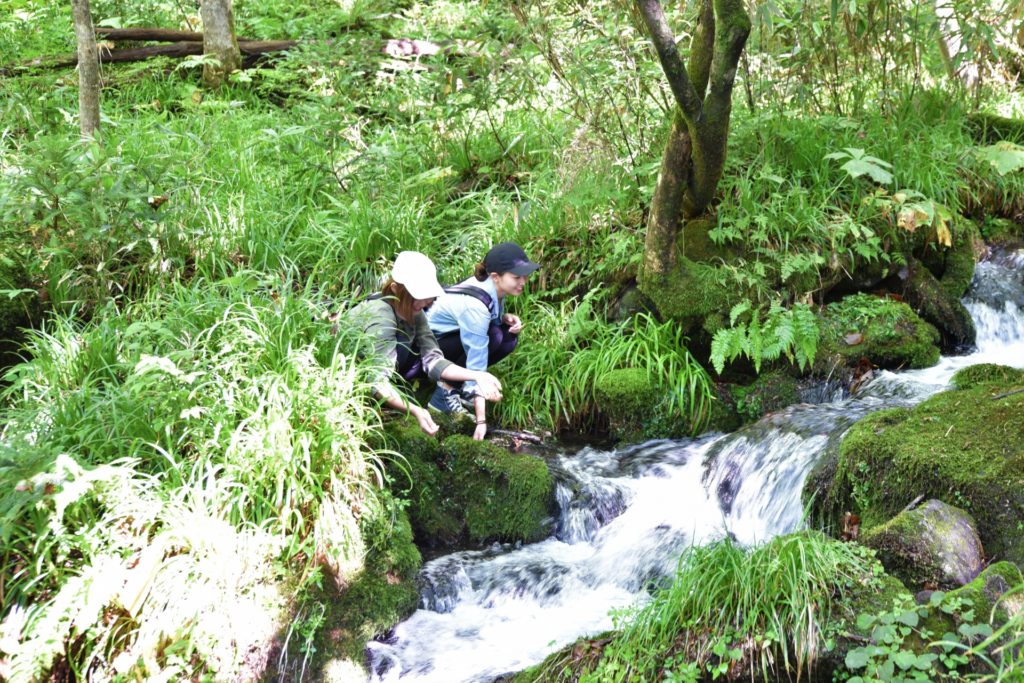 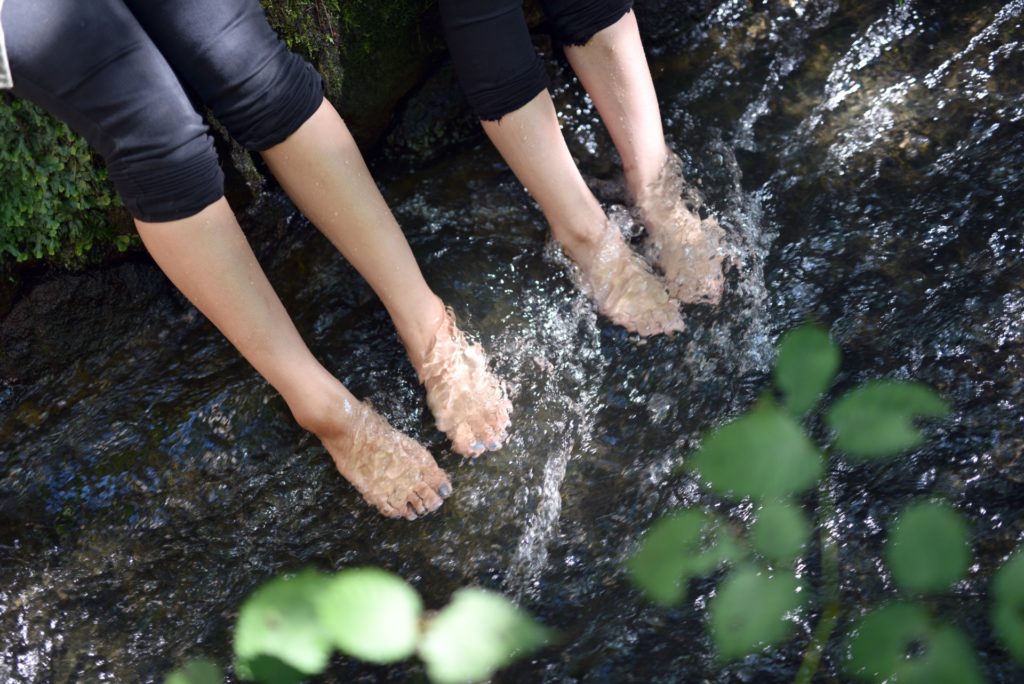 Shinano-machi is a beautiful setting for this, without a doubt. But how did this rural area, on a plateau just outside Nagano City to the south, and surrounded by high mountains and ski resorts, become the epicenter of this growing interest in healing by forest (after all, when the Wall Street Journal did a piece on shinrin-yoku, this is where they came)?

“The formal system began in 2002,” explains Chie Kosuga, one of the leaders of Shinano Woods-Life Community, the local organization operating the Forest Therapy tours. “The popularity of skiing was going down (Kurohime Kogen Ski Area is within Shinano-machi, while Tangram, Madarao and the Myoko ski areas are all adjacent to it), so the area needed a new activity to draw visitors.” CW Nicol and local guides had been talking about how the Shinano-machi forests could be better used by both visitors and locals, she says. This resulted in the start of forest therapy activities in the 1990s; in 2002, support came from Nagano Prefecture, which marked the official beginning of the town’s Forest Therapy project.

She stresses, though, that pure tourism is not the goal for Forest Therapy in Shinano-machi. “It is an attraction, but we wanted something deeper on both the physical and spiritual levels,” she says. “We really wanted to create something that could heal urban people, as well as something people here would also enjoy. I can really say that this is the birthplace of forest therapy.”

And they continue to take people out into these healthy and healing forests, both on foot from spring to fall, and on snowshoes in winter. 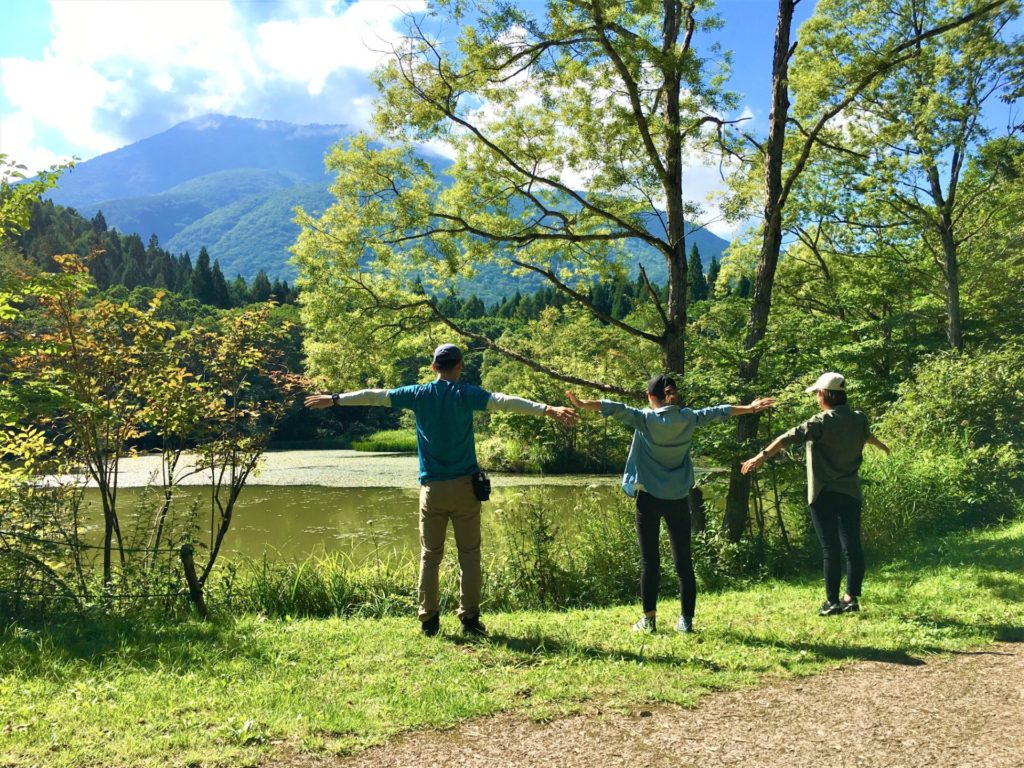 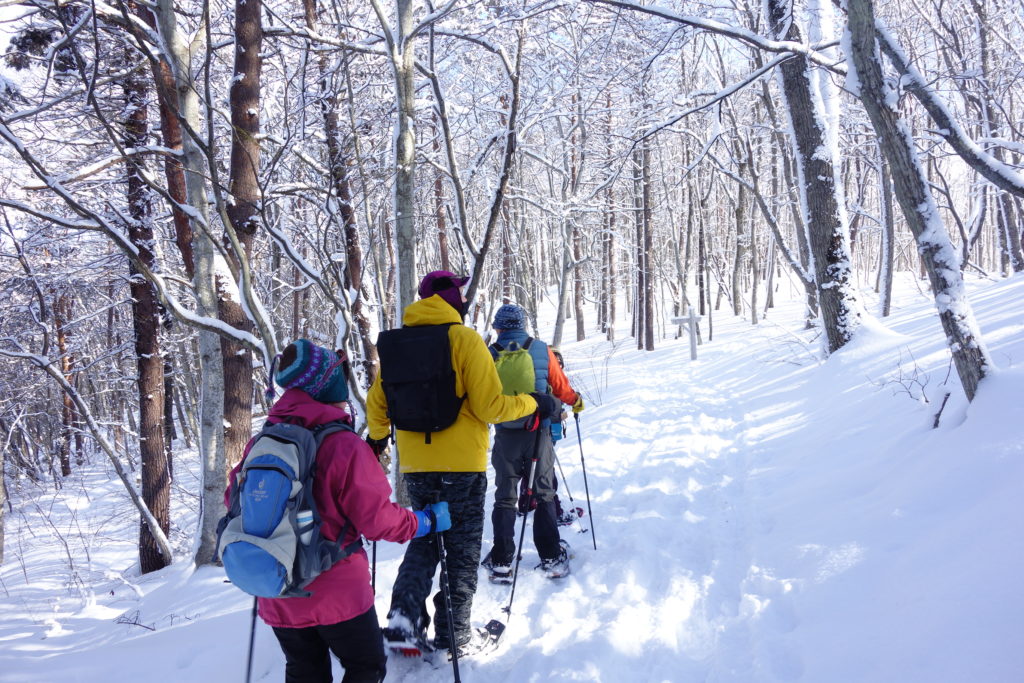